5 Ways to Encourage Children to Dress Themselves 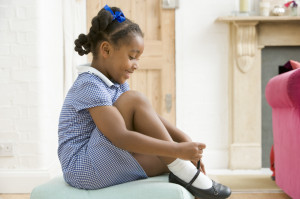 Children begin to get cranky and irritable during dressing times as they become older. Getting dressed often feels like a hassle and, during those early mornings, they are ready to start the day. There are several ways to avoid difficult dressing schedules as well as encourage children to start to dress themselves and enjoy doing it.

One way to encourage a child to dress themselves is to make it a game. A child will always respond to something better if it is made fun. To teach them about pulling on a shirt, play a game of peek-a-boo. Help them find the big hole and let them pop their head out to a “peek-a-boo!” with a round of claps. Show them how to pull their arms through so they can clap along as well. Because this is also a game they may want to do it more than once, it may be a longer process but it will be something they enjoy and look forward to. Eventually they will start the game on their own thus pulling a shirt on all by themselves.

Pants and shorts are often a little more difficult than a shirt. A good way to make this into an enjoyable game is to play tickle toes. Tickle the child’s feet and show them how the toes have to hide inside the pants to stop the tickling. Hold the pants open for them to stick their feet in and go through the tickle free tunnels to safety. After a few times, try to encourage the child to hold the pants on their own. To encourage them to pull the pants up, play a hop and pull game until the pants are secure.

A great belt option for toddlers is a hook and loop belt. These are much easier for a child to manipulate on their own. Make it a puzzle game that the child has to figure out. Demonstrate pulling through a belt loop and encourage them to pull through loops on their own. Then the hook and loop are two pieces that must fit together. The first couple of times they may need help but eventually they will be able to fit their puzzle pieces on their own. 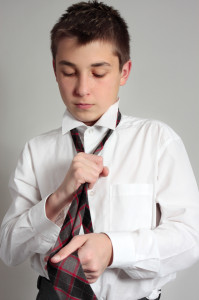 A good way to get a toddler more excited to dress themselves is to let them pick it out themselves. Give them different options for outfits and let them decide. It is a lot more fun for them to wear what they chose instead of what is handed to them. This will also be an exciting activity for the mornings.

The tone of voice of the parent is very important in every developmental stage. Children respond to the mood of their parent. If dressing times are stressful for the parent they will be stressful for the child. Always have a positive, upbeat tone while playing the dressing games and give lots of praise. The results will be far greater for both the parent and the child. Accomplishing tasks on their own is a very important aspect in any young child’s development. When a toddler can do something on their own they feel excited. Encouraging a child to start dressing themselves is an important step to teach this process and make a child’s independence thrive. What fun games have you played to encourage your child to dress themselves? Alex Toys makes this cute little monkey that teaches children how to dress themselves.

Tags: child independence, dress themselves, toddler belts
Posted in Child's Independence, Toddler Belts | Comments Off on 5 Ways to Encourage Children to Dress Themselves